Twitter has a new home page, in the time-honored style of a search engine home page. Claire Cain Miller writes in the New York Times:

It has become a cliché that first-time visitors to Twitter respond with some version of: "I don’t get it." [The new home page] tries to solve that problem. 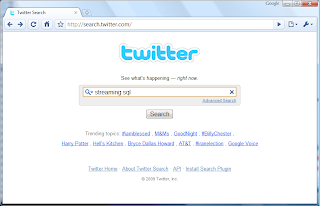 That problem is worth solving, but the home page is also an interesting sign of the melding of the old and the new.
Old web, new web

The old web is that vast repository of content, ranked by how many people reference that content, and navigated by search engines such as Google. The new web is populated by dynamic content, where what happened in the last minute is much more important than what happened yesterday.

The new, real-time web has been a wild frontier. There's a cachet to being a Twitter user; you're among pioneers, one of the elite who 'get it', not one of the ordinary folks. That's a problem for Twitter, because they need those millions of ordinary folks first to 'get it', then to get something useful out of it, come back, and start spending their click-through dollars.

But harnessing the power of the real-time web is no easy problem. First of all, streaming content is a new paradigm. Facebook are doing well at introducing a lot of people to that idea of the ever-changing home page; Twitter's minimalist concept needs more getting used to, but the search engine front-end to the stream of chatter will surely help.
Second, you need different tools to convert the noise in Twitter other social media feeds into information. A search engine is not going to cut it. The new tools cannot work on the streaming data alone; they have to combine the new data with old, organize the data, and cluster the data with other data that is similar based on subject matter, geographical proximity, or proximity of users in the social network. The stream of content hurtling past our eyes looks like chatter, just noise, until we rank it, look for trends, and put it into historical context.
Old analytics, new analytics
I find it interesting because at SQLstream we are dealing with a very similar problems for enterprise data. Business users would like to see the full spectrum of data, from right now to the distant past, but when making decisions, they want more recent data to carry more weight; they also want to take into account similarity of subject matter, geographical proximity, and the structure of social networks.

Traditional analytic solutions use data warehouses, analogous to the old, static, web and its search engine guardians. A data warehouse treats all data equally, regardless of its age. There is so much data that it has to be stored on disk, and it takes several hours to organize that data, so while a typical data warehouse will contain data from five years ago until close of business yesterday, the most important data — what happened today — hasn't reached the data warehouse yet.

SQLstream melds the old (the data warehouse) with the new (streaming events and transactions arriving over the wire), presenting a unified view via the SQL query language. We say that we "query the future", meaning that you can place standing queries that react when events of interest occur. These queries cache their working sets in memory, so the response time is a few milliseconds, and throughput tens or hundreds of thousands of records per second.

The data sources that SQLstream can handle are diverse. Some of the data comes from traditional sources, like corporate transaction processing systems. Some sources are often considered too high-volume to process in a data warehouse, such as click-stream and system monitoring data. And there are new sources like Twitter, social media, Atom and RSS feeds.

The problems of the real-time web and the real-time enterprise are surprisingly similar. Without tools to filter, aggregate, rank, and provide historical context, all of these data sources just look like noise and have little apparent value. At SQLstream, we are providing the tools to convert streams into valuable information.
Posted by Julian Hyde at 12:12 AM